FaceSDK is used in hundreds of applications for identifying and authenticating users with webcams, looking up matching faces in photo databases, automatically detecting facial features in graphic editors, and detecting faces on still images and video streams in real-time. FaceSDK has been used for building secure identification, surveillance, time and attendance control systems. 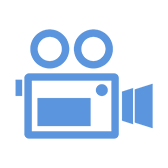 Self-learning AI recognizes persons with a couple of function calls

Automated gender and age recognition in stills and videos

Support for every webcam on the market, including MJPEG-compatible IP cameras

Automated detection of faces covered by masks in stills and videos 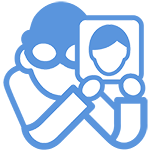 Passive liveness detection is the most sophisticated anti-spoofing technology. It does not require any special hardware, nor does it ask users to perform any actions to prove the liveness - it just works as-is by analyzing images.

Detect human faces on images from thermal cameras quickly and efficiently. Measure body temperature, screen for fever, or simply improve your security system with the capacity to distinguish real people from photos and 3D masks.

USED IN OUR APPS

How it is used?

With our powerful technologies, flexible conditions and affordable prices, we are proud to work with many well-known companies. Our customers include software developers, banks, government agencies, policy and military, enterprise, brands, entertainment, universities.

FaceSDK is widely used in many still imaging, video processing and streaming products and services as well as biometric login automation systems for implementing reliable face identification and transformation.

FaceSDK is used by multiple developers including our own company. We routinely use FaceSDK to build projects ranging from simple demonstrations to complex custom developments. You are welcome to check out the following projects we built with FaceSDK:

Compatible with 32- and 64-bit desktop environments and mobile platforms including iOS and Android, FaceSDK is easy to integrate with new or existing projects, enabling developers to create a wide variety of applications. The system detects entire faces and individual facial features, recognizes faces in still images and in real-time video streams, and allows the creation of a wide range of applications from simple automatic red-eye removal tools to biometric login solutions.

Our customers have successfully built security monitoring, access control and surveillance systems based on FaceSDK. There are numerous entertainment products and services making use of FaceSDK to create real-time animations.

When it comes to desktop and server platforms, FaceSDK supports all three major operating systems: 32-bit and 64-bit versions of Windows and Linux as well as all versions of macOS.

Our customers greatly appreciate how well the API is thought-out, and how easy it is to integrate the solution into their projects. We carefully designed FaceSDK architecture in order to speed up and simplify integration. Every little feature is demonstrated in a working sample that can be copied and used in your own project. FaceSDK supports the widest range of platforms and development environments including Windows/Linux 32/64 bit, macOS (Intel/arm), embedded Linux (arm), Android and iOS. Supported development environments include Microsoft Visual C++, C#, Objective C, Swift, Java, Python, VB.NET, VB6, Delphi, C++Builder, Netbeans, Xcode and Android Studio. Comprehensive documentation is available to help developers understand every little feature, setting and option.

We strived to deliver a robust solution allowing our customers to build maintenance-free systems. We carefully designed, implemented and tested each section of our code to ensure zero memory leaks and no lockups during operation. The system is tried by many customers on a huge number of servers running critical applications, including our own stress-loaded projects.

In addition to self-contained libraries we also offer a set of remote API’s hosted on our servers. Using our remote API’s allows developers offload computation-intensive tasks onto our powerful servers, reducing hardware dependencies and enabling Web-based clients and mobile applications that run smoothly even on entry-level smartphones.

The revolutionary self-learning AI enables video-based identification of human subjects with no prior enrolment. The API automatically recognizes all faces encountered in a video stream, registering their complete biometric information captured from the many different views and angles, complete with live emotions and expressions. Each subject can be tracked seamlessly and automatically without specific enrolment. Enrolling a person is as simple as putting a name tag in a video. This can be done at any time, and the system will automatically identify that subject in all past, present and future videos. Enrolment-free identification is perfect for building CRM systems for registration desks, access and attendance control systems, surveillance and security applications.

How does it differ from existing systems? Most current video identification systems are based on key frame processing. In other words, they discard information available in the motion stream, and revert to still image recognition instead. This design approach requires a set of sophisticated preliminary enrolment procedures where the subject’s face is captured against plain background at various angles and posed expressions.

FaceSDK 8.0.1 implements a self-learning AI video identification system. It automatically recognizes and tags all faces encountered in a video stream. Personalizing any identified subject becomes a simple matter of putting a name tag on it, or linking its tag to a database record. No special enrolment procedure is ever required. In addition, recognition rate is significantly higher in self-learning recognition systems compared to traditional key frame-based ones. On comprehensive Multi-PIE tests, the recognition rate increases sevenfold with video-based identification compared to key frame-based identification, considering that just a single image of a subject is enrolled and false acceptance rate is 0.06%.

Why Tracker API is better than manual key frame handling?

FaceSDK is designed to perform equally well under varying lighting conditions. It works fine under daylight, fluorescent and incandescent lighting. When testing on a FRGC database, the library successfully identifies individuals in 93.9% of cases if acceptable false positive is 0.1%.

Face Detection in Stills and Videos

Luxand FaceSDK returns coordinates of all human faces appearing in the picture – or notifies if no face is found. FaceSDK can track all faces appearing in a video stream. It allows finding out if a new face appears in the frame, or if one of the subjects leaves the frame. This in turn enables easy implementation of people counting. When testing on the FERET dup1+gallery database (frontal passport-like photos) successfully detects 99.5% of faces, with only 0.05% false positives.

Fast and Robust Eye Detection in Stills and Videos

FaceSDK detects coordinates of both eyes. Its high performance allows using this function on still images as well as in video streams in real-time. The ability to track eye movements enables building a variety of entertainment applications such as trying eyeglasses. An average error on FERET dup1+gallery is 3.1% of inter-ocular distance, while in 95% occurrences the error is less than 5.7% of inter-ocular distance. What do these numbers mean? They mean that, on average, if there are 100 pixels between the eyes, the eyes will be detected with the precision of +/- 3 pixels; and even if the error is greater than that, in 95% it’ll be less than 5 pixels.

Luxand FaceSDK employs sophisticated algorithms to detect and track facial features quickly and reliably. The SDK returns the coordinates of 70 facial feature points including eyes, eye contours, eyebrows, lip contours, nose tip, and so on. The detection works in real-time on desktop and mobile, which allows performing smooth real-time tracking and transformations of facial features in live video. On desktop platforms, FaceSDK delivers true 60-fps performance on video streams, while video processing on mobile platforms such as Apple iPhone 6 is performed at 30 fps in landscape orientation (and in all orientations on devices with more powerful platforms). The feature enables building applications adding new elements such as mustaches, eyeglasses or wigs; face morphing and augmented reality. By using FaceSDK, we built Mirror Reality SDK that transforms faces in real time by detecting facial features in a video stream. Another great example is a baby generator, which morphs faces of two partners to predict what their baby will look like. Developers can implement mechanisms to analyze faces detecting emotions or rotation angle. Morph, animate, or transform human faces with the SDK!

FaceSDK can automatically identify subject’s gender based on a still image or motion stream. This feature is in high demanded by retail advertisers and marketing specialists. Identification quality is 93% on still pictures, and 97% in videos.

FaceSDK automatically recognizes the person’s age based on a single still image or a handful of frames from the video stream. Depending on source quality and lighting conditions, error rate is +/- 5 years. Age recognition can be used to track age of your visitors or customers. In addition, smart robotics applications will benefit from age recognition.

FaceSDK supports all DirectShow-compatible webcams that work in Windows and v4l2 webcams in Linux. In addition, FaceSDK supports all MJPEG IP-cameras on all supported platforms, including the popular AXIS range. This is just perfect for security, surveillance and access control applications, as the use of IP cameras allows getting information remotely from distant cameras. This also allows integrating FaceSDK into existing surveillance infrastructure.

FaceSDK automatically detects faces covered by masks in stills and videos. This feature can be used to precisely detect all faces, including those covered by masks, as well as to detect whether a person is wearing a mask for security and pandemic-fighting purposes. See code and parameters for a quick setup.

FaceSDK includes a number of functions to load and manipulate images such as.bmp, .jpg, and .png, as well as memory buffers. The library can be used to resample images, rotate, crop, flip, and perform pixel-level editing. The files can be saved into the same format. These features are handy for building imaging applications even if you don’t immediately require any facial recognition features.

The library supports multi-core processors to boost the performance of face recognition, face detection, and facial feature detection. Today’s multi-core CPUs such as Intel i5, i7 and Xeon are used to their full potential. The library is completely thread-safe for using in multiple concurrent threads e.g. when receiving video streams from a large number of video cameras.